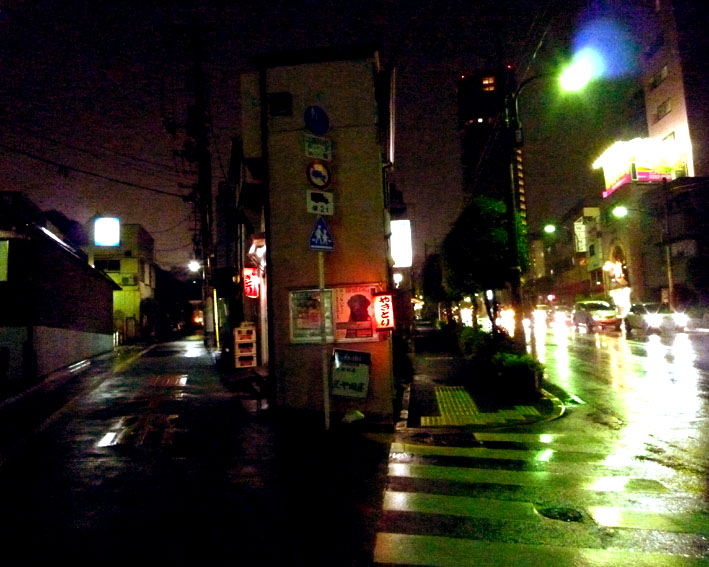 I will never forget May 28, 2008 (Wed). The night before that day, I drank some delicious cocktails at a bar called RAKE (Nishi-Azabu) that I often visit. I had only three glasses, but the next day I had a rare hangover.

After finishing some drafts, I went in the afternoon to see the Tadanori Yokoo exhibition at the Setagaya Museum. There was no uneasiness or premonition. However, I had been unsure whether to go to the Tadanori Yokoo exhibition or to visit Masaru Uchida, a mentor of mine who was in the hospital. During the golden age of the Weekly Shonen Magazine, Tadanori Yokoo and Masaru Uchida had worked together on nine different cover designs. That was why I went to Mr. Yokoo’s exhibition first. I planned to show the catalog to Mr. Uchida on Saturday, May 31st.

However… on May 30 (Fri) at 17:30 I was at the University of Tokyo when I heard of Mr. Uchida’s death… Then, chaos. I left immediately and jumped into a taxi! However, despite having jumped in, I had nowhere to go… Tears spilled without end. It was frustration more than sadness… Please, stop the time!

Then, something on the left entered my view. It was a scene that closely resembled Mr. Yokoo’s “Y intersection” motif I had seen on Wednesday! (↑ See above photo)

It was so similar that I said to the driver, “I will get off here.” 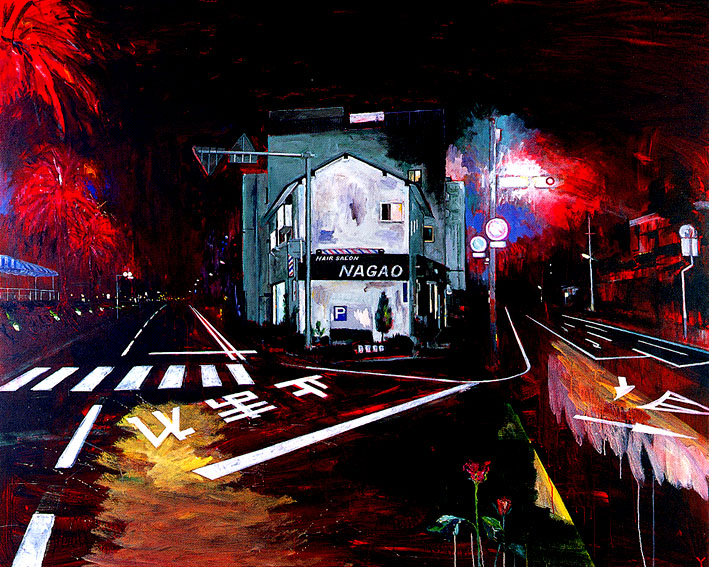 ↑ In the year 2000, Mr. Yokoo chanced upon a Y intersection in his hometown of Nishiwaki in Hyogo prefecture.

He has drawn multiple Y-shaped intersections, but the one to the left is titled “A Night in Miyazaki—Eve of Typhoon” (2004). 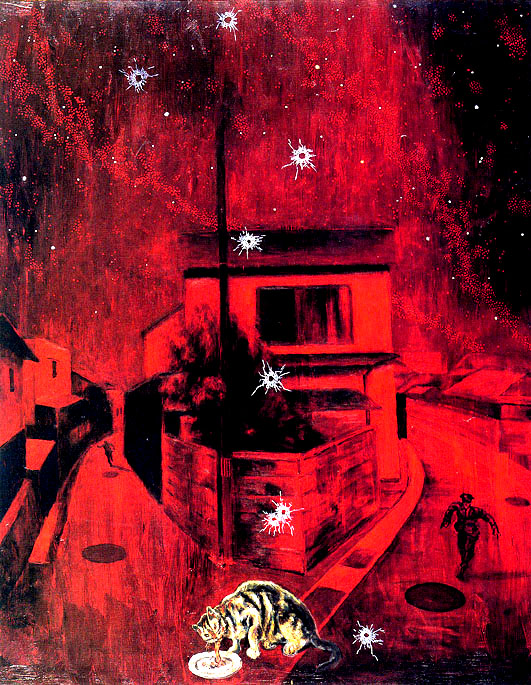 The policeman on the right, with the eating cat in the center as a point of symmetry, chases a person on the left who appears to be a thief.

Having lost the signpost for my life that was Masaru Uchida, I am still standing today in front of a Y intersection. However, one cannot brood forever. Or, perhaps the building in the center will hint at a third path regardless of whether I choose to go to the left or the right. Mr. Uchida always used to say, “Life is lived on the side roads.” Remembering this, I am trying to move forward again.